We help you
to sell your business

Most valuable companies of the Baltics 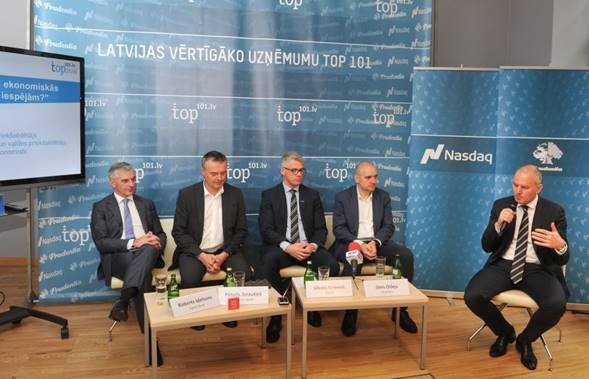 On 17 October, our Latvian partner Prudentia introduced the most valuable companies of Latvia and the Baltics. Investment Agency partners Illar Kaasik and Sulev Raik travelled to Riga to participate the event on spot. This is a unique initiative in the entire Baltics. The tradition began in 2005 with the collaboration of Prudentia and Nasdaq Riga. This year the organisers, company representatives and press met 14th times. The idea behind the project is to encourage public debate about the value of a company. After all, the most valuable companies are the country's economic engine and main source of wealth. The value of a company is an important feedback for the entrepreneur's work. This can lead to ideas for selling the company, buying a competitor, or to merge. Project history allows to analyse trends and changes over economic cycles.

Latvian TOP 101 includes companies registered in Latvia that submit their annual reports timely and those reports are publicly available. This includes both private companies and state-owned enterprises (SOEs), listed and non-listed firms. Another very important goal of the project is to encourage companies to list their share on the local stock exchange. This applies to both private companies and SOEs. We have a very good example in this context from Estonia, where Port of Tallinn made a stock exchange debut last year and we hope that Enefit Green's stock exchange plans will materialize soon when talking about SOEs. You can find TOP 101 of Latvian companies at Top 101. The evaluation methodology is provided at Top101-methodology. Unlike the Estonian TOPs known to us, the values of TOP 101 of Latvia’s most valuable enterprises reflect the enterprise value, i.e the value of enterprises future money flow collectively to all company’s finance providers (shareholders and financial creditors). The exceptions are banks and insurance companies, their evaluation reflects the company’s equity value. The dynamics of the last 10 years shows an increase in the value of private companies, which now account for 75% of the value of all companies valued. Until about 10 years ago, the proportions were 57% and 43% for the private sector, which suggests that the role of the private sector as an engine of the economy is growing. TOP 101 presentation can be found here Top101-analytics.

In addition to TOP 101, Prudentia and Nasdaq Riga also present Baltic TOP 10, where Estonian and Lithuanian companies are ranked together with Latvian ones. The most valuable company in the Baltics this year is Vilniaus Prekyba, whose best-known brand is Maxima. The value of Vilniaus Prekyba is estimated at EUR 3.6 billion. They also own the Euroaphotheka pharmacy chain, Hermitage – the chain of stores of construction materials and the real estate business. In 2018, they acquired the well-known competitor in Estonia Bauhof. The most valuable Estonian company is ranked third in the list and it is Tallink. In total, there are 4 Lithuanian, 2 Estonian and 1 Latvian company in the TOP 10 and three banks present in all Baltic countries: Swedbank, SEB and Luminor. More information can be found top10 Baltic. Out of the ten companies, only Tallink and two subsidiaries of Ignitis Grupe (Lithuanian Energy) are listed on the local stock exchange. There is room for improvement.

In the context of M&A, Baltic TOP 10 includes companies that have been involved in some landmark transactions as a target or an acquirer. For example, 60% stake in Luminor was sold to Blackstone for one billion euros. The deal got finalized just recently. In 2006, Tallink purchased Silja Line for almost 500 million euros and why not to add here the aforementioned purchase of Bauhof by Vilniaus Prekyba last year. The full list of transaction would be much longer, which proves that entrepreneurs take advantage of a variety of options to grow, including mergers and acquisitions. However, Baltic TOP 10 does not see unicorns that have brought a lot of fame to Estonia, such as TransferWise or Bolt Technology, whose market values are estimated to be north of one billion based on future potential. The reason why they are in the TOP yet is that in determining the value of a company, this TOP uses a methodology which is based on historical profitability.